… translates from Latin. Incidentally, a winery in Tolcsva, Hungary bears the same name as well as a quite famous vineyard too. I have just visited this winery recently.

‘Tokaji, the wine of kings and king of wines’ according to Louis XIV and according to many wine lovers too. The legend of the region and its famous sweet white wine have firmly increased over the centuries. The small city of Tokaj, the hub of the region that also produces the wines of the same name. Tokaji, literary means ‘from Tokaj’. It is at the confluence of the River Bodrog and the Tisza, at the the Mount of Tokaj that is part of the Zemplén Mountains in north-eastern Hungary. The region has a total of 5,000 hectares of vineyard and includes 27 small communes. It has an elongated triangular shape with the village of Abaújszántó to the north-west, Tokaj to the south and city of Satoraljaújheley to the extreme north-east. Tokaj - Hegyalja was declared a UNESCO World Heritage Site in 2002. 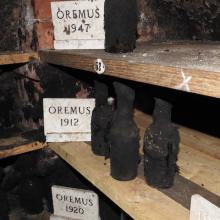 It was in the 1630’s when the excellence of the Oremus vineyard near Sátoraljaújhely was first mentioned, although the history of this vineyard dates back to the early 13th century. The Roman Catholic Pauline Order, a Hungarian founded order, had established a cloister here. In the early 1500's, the land was confiscated from the Church and became land for the aristocracy. The rumour has it that, around 1620’s the first aszú wine made from botrytized grapes was coming from this particular vineyard as a present for Zsuzsanna Lórántffy (1600-1660), the wife of Prince György Rákóczi I, produced by the Calvinist preacher Laczkó Maté Szepsi. He is considered to be the creator of the aszú. The modern aszú wine originated from his description and method, although changed considerably through the centuries. The story goes that the war with the Ottoman Turks hindered harvest, so grapes remained on the vine much longer than usual and became affected by noble rot. Szepsi used the botrytized grapes to make sweet wine that was similar to aszú as we know it today.

The cellars and parcels of Oremus had been owned by different members of the nobility than later the Hungarian State. In 1993 the Álvarez family bought it and founded Tokaj-Oremus Viñedos y Bodegas here. It became part of Tempos Vega Sicilia. The estate based in Tolcsva, where modern winemaking facilities were built in 1999. It is connected to the maze of cellars that have been carved and extended since the 12th century. Today Oremus owns 100 hectares of vineyards in 10 different locations within close vicinity. They are producing over 200,000 bottles of wine a year. Just about half of the 6-hectare famous Oremus vineyard is planted with the classic and probably autochthonous variety of the region: Furmint (Mosler, Tokay). The rest is split amongst Hárslevelű (Lindenleaf, Lindenblättriger), Sárga Muskotály (Muscat Blanc à Petits Grains, but locally referred to also as Muscat Lunel or Yellow Muscat) and Zéta (used to be called Oremus; a Hungarian cross between Bouvier and Furmint). You can find a few parcels of Kövérszőlő (Fehérszőlő) and Gohér, both local, indigenous varieties. Possibly the oldest varieties of the region almost completely disappeared after phylloxera. Nowadays there are experiments to re-establish these varieties as they are very much prone to botrytis. The fragrant Kövérszőlő ripens earlier than Furmint with good yields and high alcohol and Gohér, although low yielding has a delicate and perfumed character.

This was where we came to have a wine tasting on a rather picturesque spot, quite high up on the rolling hills. We had a tour of the state-of-the-art winery and the already mentioned cavernous, thick mould covered, ancient cellar system. They have provided warm, sheepskin vests as in the considerable heat of the Summer, the cellars are still at the somewhat chilly constant temperature of 10-12 °C.

We started off in the winery with stainless steel vats, presses, filters, endless selves of golden, maturing bottles of wines. There is a lot of information about the place, soil, grapes and other local specialities like puttony (a vessel made out of wood and carried on the back for collecting harvested grapes) and 136 litre gönci barrels that made of oaks from the Zemplén. (This oak is a particularly slow growing type, manufactured locally. There is a working cooperage nearby at Erdőbénye, that is worth a detour.) The significance of this special sized barrel was among others to establish the level of sweetness of the aszú wine. The number of puttony of shrivelled berries added to the a gönci barrel of wine indicated the level of sweetness, the more added the sweeter or in fact the higher in sugar content the end product gets.

The actual tasting took place in the cellar itself. It was a bit of a surprise for me! The ambiance was fantastic in the dim-lit room, surrounded by antic bottles, with the heavy, stuffy smell and burning candles. To be fair, as much as it gave a rather special feel to the tasting, you could hardly see, and the generic cellar odour did not help to enjoy the wines to the full. Having said that, the selection of wines was great with sweet, dry wines and a late harvest. We even got to taste an Essencia from 2006, which was absolutely fabulous. Essencia (translates to ‘essence’) is the free run juice of botrytized grapes that can slowly ferment for decades on end or even longer. The resulting alcoholic juice has a modest 4-5% ABV but an extremely high sugar (it can go up to 800 g/l), acid and extract content. It cost extortionate amounts of money even from the cellar if it ever gets bottled. Not every winery produces it and it usually used to enhance the quality of other wines.

It was a great experience, on a lovely location with a very knowledgeable guide!